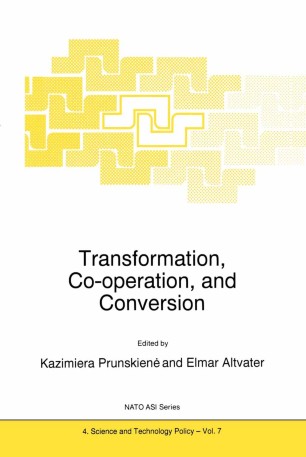 The scientific-technical potential of the Baltic States and their possibilities for co­ operation with Europe require in-depth, specific analysis. With the deterioration of the structures of science and technology of the former Soviet Union, the severance of communications with former clients, industry and science and technology, the Baltic States - the leaders of the former Soviet Union in this area, faced a difficult new situation. The government budgets of these countries, due to economic decline, are not capable of financing scientific research and project studies, and industry has lost a large part (in some branches this loss reaches even 2/3 or more) of its potential, losing both funds and interest in the sciences. The conversion of industry in the Baltic States is tied with the whole of its restructurisation, which still has not attained more precise directions for a new specialization or connections to the international market. The earlier dominant branches, such as machine production, electro-technology, radio-technology and the electronics industry, require essential modernization, which is possible only through co-operation with other developed countries, especially with the EU and NATO countries. This co-operation could include new mobilized capacities of science and technology. A longer period of stagnation and separation may adversely affect these capacities and lead to their dilution and weakening, due to the "brain drain" of more qualified scientists and specialists to the commercial sector, which does not require high intellectual levels.