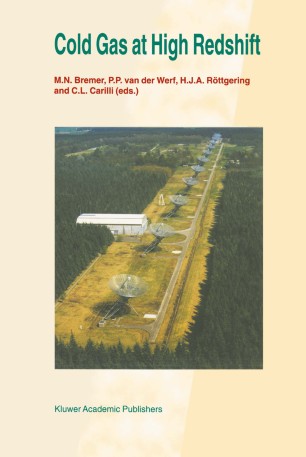 Proceedings of a Workshop Celebrating the 25th Anniversary of the Westerbork Synthesis Radio Telescope, held in Hoogeveen, The Netherlands, August 28–30, 1995

Recent years have seen increasing evidence that the main epoch of galaxy formation in the universe may be directly accessible to observation. An­ gular fluctuations in the background relict radiation have been detected by various ground-based instruments as well as by the COBE satellite, and suggest that the epoch of galaxy formation was not so very early. Combined optical and radio studies have found galaxies at redshifts above 2. 0, systems that at least superficially show the characteristics expected of large galaxies seen only shortly after their formation. And absorption lines in the spectra of quasars seem to be telling us that most cold gas at early to intermediate cosmological epochs was in clouds having roughly galaxy sized masses. What kinds of new observations will best help us study this high redshift universe in future? What new instruments will be needed? These are questions that loom large in the minds of the Dutch astronom­ ical community as we celebrate 25 years of operation of the Westerbork Synthesis Radio Telescope. Celebration of this Silver Jubilee has included a birthday party (on 23 June, 1995), a commemorative volume looking at both the history and the future of the facility ("The Westerbork Observa­ tory, Continuing Adventure in Radio Astronomy," Kluwer 1996), and an international workshop, held in the village of Hoogeveen on 28-30 August, 1995.