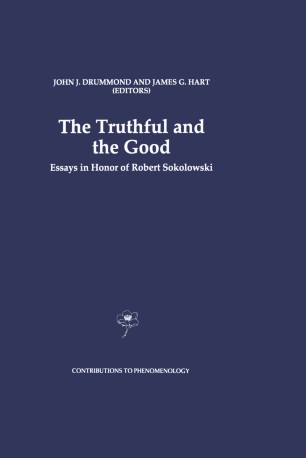 The Truthful and the Good

Essays in Honor of Robert Sokolowski

Part of the Contributions to Phenomenology book series (CTPH, volume 23)

lbis volume was occasioned by the desire of its contributors to honor Robert Sokolowski on his sixtieth birthday. The desire first took fonn on the streets of an American metropolis when several of us, while attending a philosophy conference, were bemoaning the lack of passion for doing philosophy as we all conceived it. In this expression of our discontent we all had a common exemplar in mind, someone for whom the passion for "the truthful" and "the good" is embodied in every sentence of his rich writings. Felicitously this very thinker was someone whom we an regard as manifesting in his person and life these same properties which his writings exhibit and pursue as luminous ideals. As a result, John Brough, John Drummond, and I came up with the idea that we hold our own conference and do philosophy as we envisage it and at the same time honor its foremost exemplary practitioner whose sixtieth birthday was the following year. Immediately the idea took wings among the handful ofus and the dreariness of that philosophy congress receded. The first task of thinking of possible speakers was easy. The issue of the venue for our symposium, what I like to call the "Sokofest," had to be decided, as well as the details of its realization.