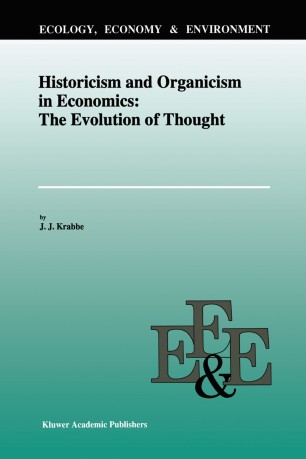 Historicism and Organicism in Economics: The Evolution of Thought

This study looks at the roots of German legacy historistic and organistic economic thought, gives a survey of its development and indicates the present-day significance of these ideas. This approach is also of significance for today's institutional economics, and for the field of environmental and resource economics. In this book these fields of study are referred to in various ways. Essentially, some new ideas appear to be rather old and, what amounts to the same, some old ideas appear to be topical. This is particularly true of the "historical approach" to the economy, with its idea of development. It is also true of the organistic approach, which is largely tied up with it. The point of departure is my study on· the G. erman Historical School, published in Dutch in 1983. The scope of the following work, however, is broader, as it also refers to the evolution of historically oriented and organistically oriented economic thought in general. Thus, a number of authors who did not think along the lines of the Historical School are included. For instance, the organically oriented ideas of Menger and Georgescu-Roegen are also examined, as well as the ideas of those who were among the "Institutionalists" and other present-day writers in this field. This study is supported by various publications by other writers. A great part of the literature under consideration is in German.