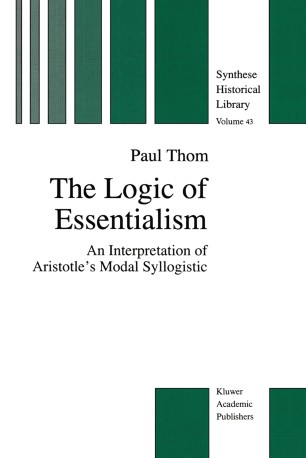 The Logic of Essentialism

An Interpretation of Aristotle’s Modal Syllogistic

Aristotle's modal syllogistic has been an object of study ever since the time of Theophrastus; but these studies (apart from an intense flowering in the Middle Ages) have been somewhat desultory. Remarkably, in the 1990s several new lines of research have appeared, with series of original publications by Fred Johnson, Richard Patterson and Ulrich Nortmann. Johnson presented for the first time a formal semantics adequate to a de re reading of the apodeictic syllogistic; this was based on a simple intuition linking the modal syllogistic to Aristotelian metaphysics. Nortmann developed an ingenious de dicto analysis. Patterson articulated the links (both theoretical and genetic) between the modal syllogistic and the metaphysics, using an analysis which strictly speaking is neither de re nor de dicto. My own studies in this field date from 1976, when my colleague Peter Roeper and I jointly wrote a paper "Aristotle's apodeictic syllogisms" for the XXIInd History of Logic Conference in Krakow. This paper contained the disjunctive reading of particular affirmative apodeictic propositions, which I still favour. Nonetheless, I did not consider that paper's results decisive or comprehensive enough to publish, and my 1981 book The Syllogism contained no treatment of the modal syllogism. The paper's ideas lay dormant till 1989, when I read Johnson's and Patterson's initial articles. I began publishing on the topic in 1991. Gradually my thoughts acquired a certain comprehensiveness and systematicity, till in 1993 I was able to take a semester's sabbatical to write up a draft of this book.