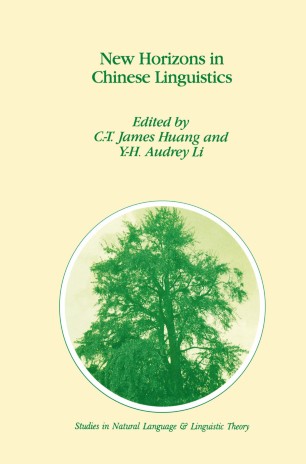 The past decade and a half has witnessed a great deal of renewed interest in the study of Chinese linguistics, not only in the traditional areas of philological studies and in theoretically oriented areas of syn­ chronic grammar and language change but also in the cultivation of new frontiers in related areas of the cognitive sciences. There is a significant increase in the number of students studying one area or another of the linguistic structure of Chinese in various linguistic programs in the United States, Europe, Australia and in China, Hong Kong, Singapore, Taiwan, and other parts of Asia. Several new academic departments devoted to the study of linguistics have been established in Taiwan and Hong Kong in the past few years. The increasing research and study activities have also resulted in a number of national and international conferences, including the North American Conference on Chinese Linguistics (NACCL), which has been held annually in the United States; the International Symposium on Chinese Languages and Linguistics (IsCLL), which has had its fourth meeting since it was launched by Academia Sinica in Taiwan in 1990; the International Association of Chinese Linguistics (lACL), created in Singapore in 1992 and now incorporated in Irvine, California, which has held its annual meetings at major institutions in Asia, Europe, and the US.