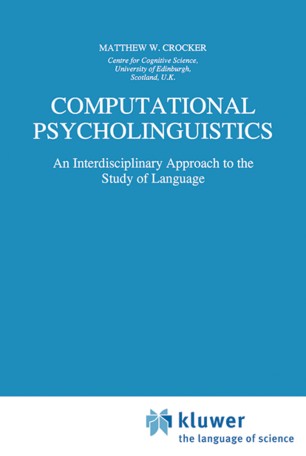 An Interdisciplinary Approach to the Study of Language

Computational Psycholinguistics: An Interdisciplinary Approach to the Study of Language investigates the architecture and mechanisms which underlie the human capacity to process language. It is the first such study to integrate modern syntactic theory, cross-linguistic psychological evidence, and modern computational techniques in constructing a model of the human sentence processing mechanism.
The monograph follows the rationalist tradition, arguing the central role of modularity and universal grammar in a theory of human linguistic performance. It refines the notion of `modularity of mind', and presents a distributed model of syntactic processing which consists of modules aligned with the various informational `types' associated with modern linguistic theories. By considering psycholinguistic evidence from a range of languages, a small number of processing principles are motivated and are demonstrated to hold universally. It is also argued that the behavior of modules, and the strategies operative within them, can be derived from an overarching `Principle of Incremental Comprehension'.
Audience: The book is recommended to all linguists, psycholinguists, computational linguists, and others interested in a unified and interdisciplinary study of the human language faculty.