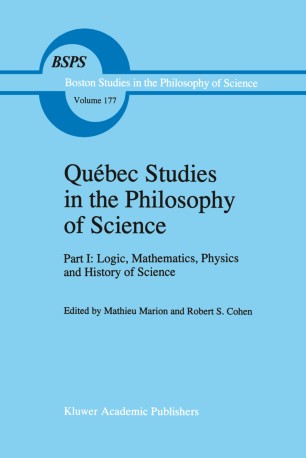 Québec Studies in the Philosophy of Science

Part I: Logic, Mathematics, Physics and History of Science Essays in Honor of Hugues Leblanc

Part of the Boston Studies in the Philosophy of Science book series (BSPS, volume 177)

By North-American standards, philosophy is not new in Quebec: the first men­ tion of philosophy lectures given by a Jesuit in the College de Quebec (founded 1635) dates from 1665, and the oldest logic manuscript dates from 1679. In English-speaking universities such as McGill (founded 1829), philosophy began to be taught later, during the second half of the 19th century. The major influence on English-speaking philosophers was, at least initially, that of Scottish Empiricism. On the other hand, the strong influence of the Catholic Church on French-Canadian society meant that the staff of the facultes of the French-speaking universities consisted, until recently, almost entirely of Thomist philosophers. There was accordingly little or no work in modem Formal Logic and Philosophy of Science and precious few contacts between the philosophical communities. In the late forties, Hugues Leblanc was a young student wanting to learn Formal Logic. He could not find anyone in Quebec to teach him and he went to study at Harvard University under the supervision of W. V. Quine. His best friend Maurice L' Abbe had left, a year earlier, for Princeton to study with Alonzo Church. After receiving his Ph. D from Harvard in 1948, Leblanc started his profes­ sional career at Bryn Mawr College, where he stayed until 1967. He then went to Temple University, where he taught until his retirement in 1992, serving as Chair of the Department of Philosophy from 1973 until 1979.