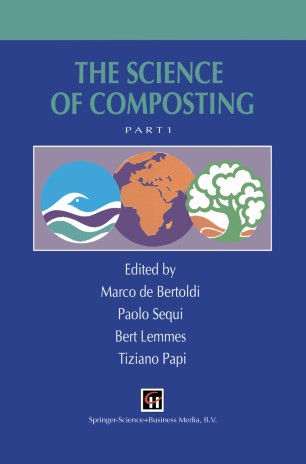 The Science of Composting

The European Union initially demonstrated its interest in waste in the late 70s with the progamme on Waste Recycling Research and Development. At that time composting was only present as a coordination activity and it was only later that specific research programmes in the area were within Europe which was largely instrumental in setting up a series of European conferences, seminars and work­ shops. Some of these have resulted in publications which have made significant contributions to developments in the understanding of composting and the use of composts. In particular the outputs from meetings in Oxford ( 1984), Udine (1986), Neresheim ( 1988) and Angers ( 1991) are worthy of note. Composting has seen significant changes since the 70s when the major thrust in Europe was using mixed municipal solid waste as a feed material. Many com­ posting plants which were built to use this material were closed due to the poor quality of the compost which made it very difficult to market. As a result the main areas of interest, as far as the municipa1ities are concemed, are now with biowaste and source-separated organics. This interest is apparent from the many new plants which are being constructed across Europe, and the ready market which exists for the products. In parallel with the renewed interest of the municipalities other areas, such as agriculture and the wastewater treatment industries, are also developing their own schemes.