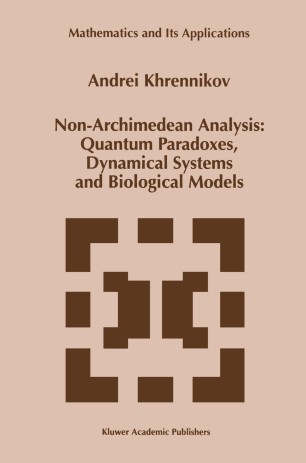 Part of the Mathematics and Its Applications book series (MAIA, volume 427)

N atur non facit saltus? This book is devoted to the fundamental problem which arises contin­ uously in the process of the human investigation of reality: the role of a mathematical apparatus in a description of reality. We pay our main attention to the role of number systems which are used, or may be used, in this process. We shall show that the picture of reality based on the standard (since the works of Galileo and Newton) methods of real analysis is not the unique possible way of presenting reality in a human brain. There exist other pictures of reality where other num­ ber fields are used as basic elements of a mathematical description. In this book we try to build a p-adic picture of reality based on the fields of p-adic numbers Qp and corresponding analysis (a particular case of so called non-Archimedean analysis). However, this book must not be considered as only a book on p-adic analysis and its applications. We study a much more extended range of problems. Our philosophical and physical ideas can be realized in other mathematical frameworks which are not obliged to be based on p-adic analysis. We shall show that many problems of the description of reality with the aid of real numbers are induced by unlimited applications of the so called Archimedean axiom.