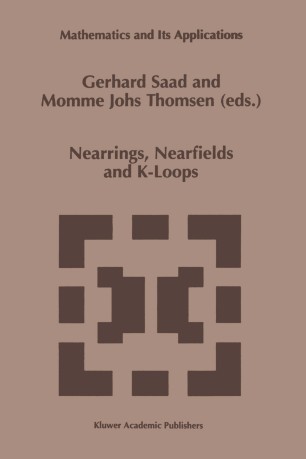 Proceedings of the Conference on Nearrings and Nearfields, Hamburg, Germany, July 30–August 6,1995

Part of the Mathematics and Its Applications book series (MAIA, volume 426)

This present volume is the Proceedings of the 14th International Conference on Near­ rings and Nearfields held in Hamburg at the Universitiit der Bundeswehr Hamburg, from July 30 to August 06, 1995. This Conference was attended by 70 mathematicians and many accompanying persons who represented 22 different countries from all five continents. Thus it was the largest conference devoted entirely to nearrings and nearfields. The first of these conferences took place in 1968 at the Mathematische For­ schungsinstitut Oberwolfach, Germany. This was also the site of the conferences in 1972, 1976, 1980 and 1989. The other eight conferences held before the Hamburg Conference took place in eight different countries. For details about this and, more­ over, for a general historical overview of the development of the subject, we refer to the article "On the beginnings and development of near-ring theory" by G. Betsch [3]. During the last forty years the theory of nearrings and related algebraic struc­ tures like nearfields, nearmodules, nearalgebras and seminearrings has developed into an extensive branch of algebra with its own features. In its position between group theory and ring theory, this relatively young branch of algebra has not only a close relationship to these two more well-known areas of algebra, but it also has, just as these two theories, very intensive connections to many further branches of mathematics.