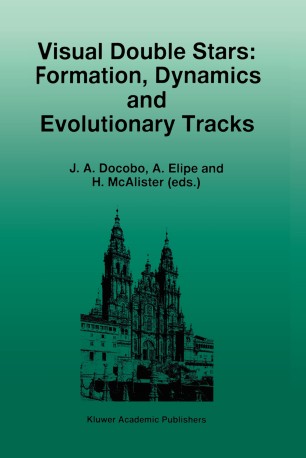 This workshop is devoted to Double stars. The general topics of the meeting were: for­ mation, dynamics and evolutionary tracks. In accordance with the pure tradition of the Saint James way, "pilgrims" from all over the world come to meet together in Santiago. Although with a common interest (double stars), this meeting was a multidisciplinary one, since scientists with different backgrounds participated in it. As a matter of fact, we think that this is the first workshop jointly supported by IAU Commissions 7 (Celestial mechanics) and 26 (Double and multiple stars). It is our belief that this meeting will be the origin of a more close relations and common research. This meeting was held under the invitation of the University of Santiago de Compostela to commemorate its fifth centenary, and organized by the Astronomical Observatory named after its founder, Ramon M. Aller, who made significant contributions in the study of visual double stars, and was one of the pioneers who put the seeds of the present blossoming of Astronomy in Spain. The Scientific Organizing Committee was formed by Drs. C. Allen, P. Couteau, J. A. Docobo, R. Dvorak, A. Elipe, S. Ferraz-Mello (co-chairman), H.A.McAlister, M. Valtonen, C.Worley (chairman) and H. Zinnecker. The Local Organizing Committee was formed by Drs. J. A. Docobo (chairman), A.