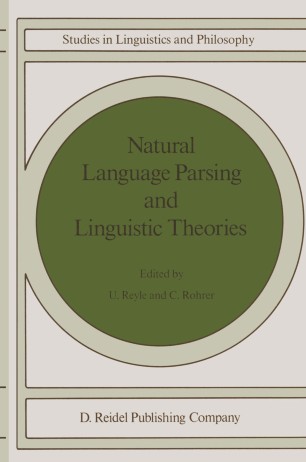 Part of the Studies in Linguistics and Philosophy book series (SLAP, volume 35)

presupposition fails, we now give a short introduction into Unification Grammar. Since all implementations discussed in this volume use PROLOG (with the exception of BlockjHaugeneder), we felt that it would also be useful to explain the difference between unification in PROLOG and in UG. After the introduction to UG we briefly summarize the main arguments for using linguistic theories in natural language processing. We conclude with a short summary of the contributions to this volume. UNIFICATION GRAMMAR 3 Feature Structures or Complex Categories. Unification Grammar was developed by Martin Kay (Kay 1979). Martin Kay wanted to give a precise defmition (and implementation) of the notion of 'feature'. Linguists use features at nearly all levels of linguistic description. In phonetics, for instance, the phoneme b is usually described with the features 'bilabial', 'voiced' and 'nasal'. In the case of b the first two features get the value +, the third (nasal) gets the value -. Feature­ value pairs in phonology are normally represented as a matrix. bilabial: + voiced: + I nasal: - [Feature matrix for b.] In syntax features are used, for example, to distinguish different noun classes. The Latin noun 'murus' would be characterized by the following feature-value pairs: gender: masculin, number: singular, case: nominative, pred: murus. Besides a matrix representation one frequently fmds a graph representation for feature value pairs. The edges of the graph are labelled by features. The leaves denote the value of a feature.