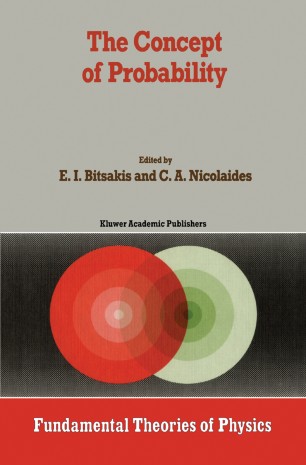 This volume contains articles from invited speakers at a meeting which took place in Delphi, during the week of October 12-16, 1987. The theme of the meeting was ''The concept of probability" and was organized by the "Group of Interdisciplinary Research" (Physics Department, University of Athens) and the Theoretical and Physical Chemistry Institute of the National Hellenic Research Foundation, Athens. (The Group ofInterdisciplinary Research organized two previous Meetings, 1) on the Concept of physical reality (1982) and 2) on the question of determinism in Physics (1984». This small gathering, which was attended by scientists, mathematicians and philosophers from more than 22 countries, took place on the occasion of the 100th year from the birthday of E.Schrodinger. As the father of wave-mechanics, Schrodinger thrushed us into an era of physics where knowledge of the lV-function is considered, for most situations, as the ultimate aim and the ultimate truth. Yet, he, as well as another towering figure of 20th century physics, A.Einstein, never really felt confortable with the interpretation of the meaning oflV and of the information that it contains. With Einstein playing the leading role a debate about concepts and interpretation started as soon as quantum mechanics was born. Central theme to this debate is the concept of probability, a concept which permeates-explicitly or implicitly-all science and even our decision making in everyday life. The articles cover a broad spectrum of thought and results -mathematical, physical, epistemological, experimental, specific, general,-many of them outside the accepted norm.