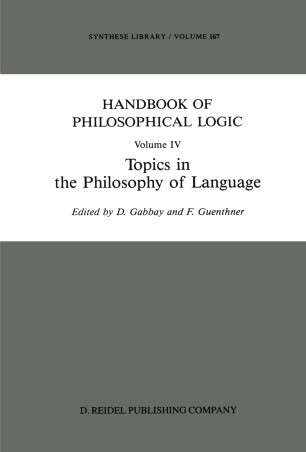 Volume IV: Topics in the Philosophy of Language

conceptual, realist) theories of predication. Chapter IV.4 centers on an important class of expressions used for predication in connection with quantities: mass expressions. This chapter reviews the most well-known approaches to mass terms and the ontological proposals related to them. In addition to quantification and predication, matters of reference have constituted the other overriding theme for semantic theories in both philosophical logic and the semantics of natural languages. Chapter IV.5 of how the semantics of proper names and descrip­ presents an overview tions have been dealt with in recent theories of reference. Chapter IV.6 is concerned with the context-dependence of reference, in particular, with the semantics of indexical expressions. The topic of Chapter IV.7 is related to predication as it surveys some of the central problems of ascribing propositional attitudes to agents. Chap­ ter IV.8 deals with the analysis of the main temporal aspects of natural language utterances. Together these two chapters give a good indication of the intricate complexities that arise once modalities of one or the other sort enter on the semantic stage. in philosophical Chapter IV.9 deals with another well-known topic logic: presupposition, an issue on the borderline of semantics and prag­ matics. The volume closes with an extensive study of the Liar paradox and its many implications for the study of language (as for example, self­ reference, truth concepts and truth definitions).

`This volume is a very important one as it covers many interesting topics ... and must be considered central to the field of semantics. ... The different chapters each elucidate their respective topic and with the historical overviews the reader gets the entire development in each subarea up to 1985.'
Studia Linguistica, 44 (2) 1990
Buy options