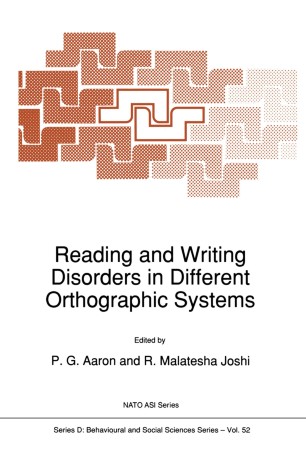 Even though Specific Reading Disability (Dyslexia) has been clinically recognized as a developmental learning disorder for nearly a hundred years. only within the past two decades it has become the subject of major experimental investigation. Because. by definition. dyslexic children are of average or superior intelligence. it is often suspected that some arcane feature of the written language is responsible for the inordinate difficulty experienced by these children in learning to read. The occasional claim that developmental dyslexia is virtually nonexistent in some languages coupled with the fact that languages differ in their writing systems has further rendered orthography a subject of serious investigation. The present Volume represents a collection of preliminary reports of investigations that explored the relationship between orthography and reading disabilities in different languages. Even though not explicitly stated. these reports are concerned with the question whether or not some orthographies are easier to learn to read and write than others. One dimension on which orthographies differ from each other is the kind of relationship they bear to pronunciation. The orthographies examined in this book range from the ones that have a simple one-to­ one grapheme-phoneme relationship to those which have a more complex relationship.