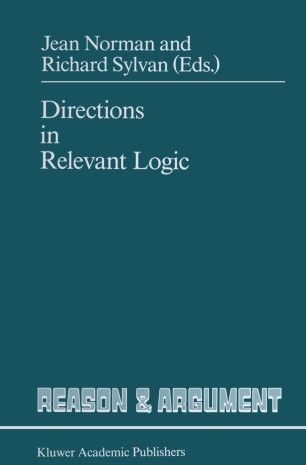 Part of the Reason and Argument book series (REAR, volume 1)

Relevance logics came of age with the one and only International Conference on relevant logics in 1974. They did not however become accepted, or easy to promulgate. In March 1981 we received most of the typescript of IN MEMORIAM: ALAN ROSS ANDERSON Proceedings of the International Conference of Relevant Logic from the original editors, Kenneth W. Collier, Ann Gasper and Robert G. Wolf of Southern Illinois University. 1 They had, most unfortunately, failed to find a publisher - not, it appears, because of overall lack of merit of the essays, but because of the expense of producing the collection, lack of institutional subsidization, and doubts of publishers as to whether an expensive collection of essays on such an esoteric, not to say deviant, subject would sell. We thought that the collection of essays was still (even after more than six years in the publishing trade limbo) well worth publishing, that the subject would remain undeservedly esoteric in North America while work on it could not find publishers (it is not so esoteric in academic circles in Continental Europe, Latin America and the Antipodes) and, quite important, that we could get the collection published, and furthermore, by resorting to local means, published comparatively cheaply. It is indeed no ordinary collection. It contains work by pioneers of the main types of broadly relevant systems, and by several of the most innovative non-classical logicians of the present flourishing logical period. We have slowly re-edited and reorganised the collection and made it camera-ready.