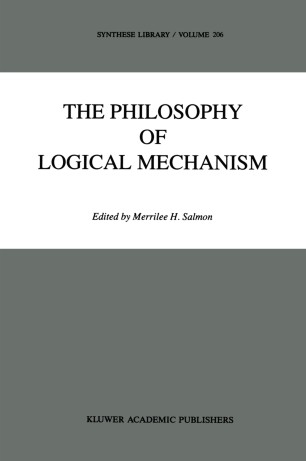 The Philosophy of Logical Mechanism

Essays in Honor of Arthur W. Burks, with his responses

This work is divided into two parts. Part I contains sixteen critical es­ says by prominent philosophers and computer scientists. Their papers offer insightful, well-argued contemporary views of a broad range of topics that lie at the heart of philosophy in the second half of the twen­ tieth century: semantics and ontology, induction, the nature of prob­ ability, the foundations of science, scientific objectivity, the theory of naming, the logic of conditionals, simulation modeling, the relatiOn be­ tween minds and machines, and the nature of rules that guide be­ havior. In this volume honoring Arthur W. Burks, the philosophical breadth of his work is thus manifested in the diverse aspects of that work chosen for discussion and development by the contributors to his Festschrift. Part II consists of a book-length essay by Burks in which he lays out his philosophy of logical mechanism while responding to the papers in Part I. In doing so, he provides a unified and coherent context for the range of problems raised in Part I, and he highlights interesting relationships among the topics that might otherwise have gone un­ noticed. Part II is followed by a bibliography of Burks's published works.