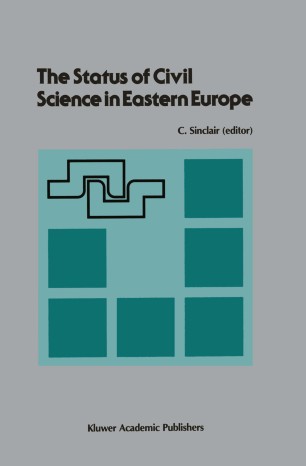 The Status of Civil Science in Eastern Europe

The NATO Science Programme, under the direction of the Science Com­ mittee, mounted in September 1986 a successful meeting which examined the structure and outputs of civil science in the Soviet Union. As a topical sectoral examination of the evolutionary state of the Soviet Union under those in­ separable and elusive twins, 'perestroyka' and 'glasnost', it was successful in providing the basis for assessments of the likely future role of Soviet scientists in the world scene. Such meetings are infrequent events in the Programme calendar; the Science Programme has concentrated for thirty years almost exclusively on supporting scientific mobility in the Alliance countries. This it does, essentially, through the funding under competitive conditions, of fellow­ ships, exchanges and meetings of researchers. Such activities are a response to unsolicited scientific demand from the Alliance R&D community which sees mobility as an essential part of scientific dissemination (rather lacking it would appear from the following accounts in the Eastern European countries). The Committee, however, does like to act upon its own behalf in supporting wider perceptions of the place of R&D in the world by examining, from time to time, topics of strong current interest. These have taken the form of the consideration of particularly pressing issues, as arose for example in the series of energy and material supply crises of the seventies.