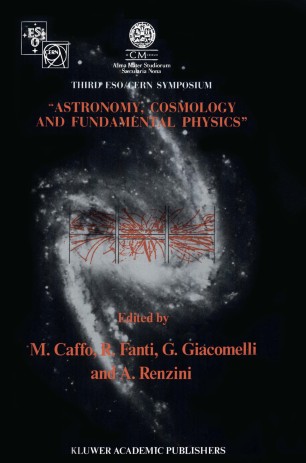 Proceedings of the Third ESO-CERN Symposium, Held in Bologna, Palazzo Re Enzo, May 16–20, 1988

In the development of Fundamental Physics on one side, and of Astronomy/Cosmology on the other side, periods of parallell, relatively independent progress seem to alternate with others of intense interaction and mutual influence. To this latter case belong the very beginnings of Modern Physics, with Galileo and Newton. There is now a widespread feeling that another of such flourishing periods may have started some ten years ago, with the advent of Unified Theories and the introduction of Inflationary Cosmologies. The interaction between the two disciplines has become tighter ever since, spurring studies of e. g. astronomical and particle Dark Matter candidates, Superstrings and Cosmic Strings, phase transitions in the Early Universe, etc. etc. Then the recent birth of Neutrino Astronomy has added further flavor to this splendid conjunction. It was indeed with the clear perception of this trend that six years ago CERN and ESO decided to jointly organize a series of symposia focusing on the interactions between Astronomy, Cosmology, and Fundamental Physics, to be held about every two years. The aim of these meetings is to bring together astronomers, cosmologists, and particle physicists to exchange information, to discuss scientific issues of common interest, and to take note of the latest devolopments in each discipline that are relevant to the other. The First ESO-CERN Symposium was held at CERN (Geneva) on November 21-25, 1983. Then for its Second edition the ESO-CERN Symposium moved to Garching bei Miinchen, where ESO headquarters are located, and took place on March 17-21, 1986.