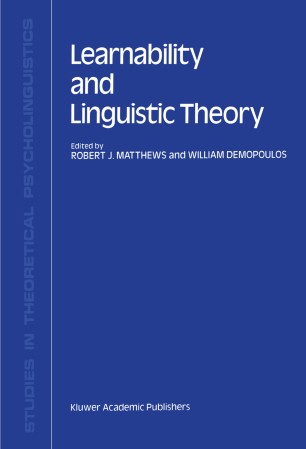 The impetus for this volume developed from the 1982 University of Western Ontario Learnability Workshop, which was organized by the editors and sponsored by that University's Department of Philosophy and the Centre for Cognitive Science. The volume e~plores the import of learnability theory for contemporary linguistic theory, focusing on foundational learning-theoretic issues associated with the parametrized Government-Binding (G-B) framework. Written by prominent re­ searchers in the field, all but two of the eight contributions are pre­ viously unpublished. The editor's introduction provides an overview that interrelates the separate papers and elucidates the foundational issues addressed by the volume. Osherson, Stob, and Weinstein's "Learning Theory and Natural Language" first appeared in Cognition (1984); Matthews's "The Plausi­ bility of Rationalism" was published in the Journal of Philosophy (1984). The editors would like to thank the publishers for permission to reprint these papers. Mr. Marin Marinov assisted with the preparation of the indices for the volume. VB ROBERT 1. MATTHEWS INTRODUCTION: LEARNABILITY AND LINGUISTIC THEORY 1. INTRODUCTION Formal learning theory, as the name suggests, studies the learnability of different classes of formal objects (languages, grammars, theories, etc.) under different formal models of learning. The specification of such a model, which specifies (a) a learning environment, (b) a learn­ ing strategy, and (c) a criterion for successful learning, determines (d) a class of formal objects, namely, the class that can be acquired to the level of the specified success criterion by a learner implementing the specified strategy in the specified enviroment.