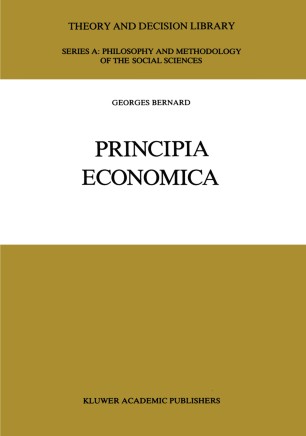 It has already been said, if not written, that progress in knowledge in any domain consists mainly of expressing things that are well known in a different and, if possible, new way. That is the purpose of this book. In his solitary effort an author is entirely and solely responsible for what he writes, including any mistakes or errors in the text. This is the case here as this book is not a result of a pluridisciplinary effort. It seems to the author that while reflection can be and sometimes is fruitful in a team, the task of bringing to light new ideas or to shed new light on old ones is mostly a solitary exercise. There are many illustrious examples to which, of course, the author does not compare himself: Quesnay, Rousseau, A. Smith, D. Ricardo, Fourier, Walras, Keynes, Freud and many others. The text contains many analogies between economics and phys­ ics. This last 'exact' science has adopted two paradigms in this century: disequilibria are essential and normal states; the dynamics of events, the temporal evolution of states, is the explanation of Nature. One could also add a third, the fundamental principles of uncertainty and randomness. The deterministic models that were current at the end of the last century were, on the contrary, attached to states of equilibrium and were invariant with respect to time as they assumed perfect causa­ lity, i.e. a perfect knowledge of the future.