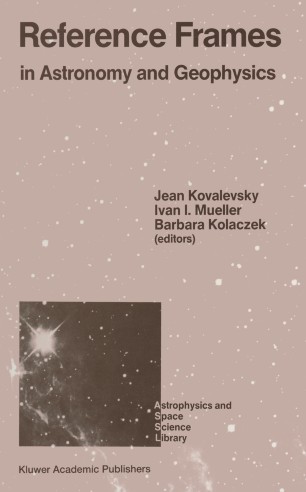 In Astronomy and Geophysics

This book on reference systems is the first comprehensive review of the problem of celestial and terrestrial reference systems and frames. Over 20 years, the importance of this problem emerged slowly as the accuracy of new observational techniques improved. The topic has already been approached in several symposia such as Stresa (1967), Morioka (1971), Perth (1973), Columbus (1975, 1978 and 1985), Kiev (1977) and San Fernando (1978). Two IAU colloquia held in Turin (1974) and in Warsaw (1980) were exclusively devoted to discuss reference systems. During this time, the problem of terrestrial and celestial reference systems has been discussed also in many astronomical and geodetic symposia, but always among other topics. Thus, a review devoted solely to the definition and practical realization of such systems was needed. It is hoped that this book, containing modern comprehensive reviews of important facets of this problem will contribute not only to a better and wider understanding of the mathematics and the physics that are behind the concepts and the realizations, but also to future development in a field that can only expand with the rapidly increasing accuracy of geodetic and astronomical observations. We are pleased to thank all the authors of the book who have enthusiastically agreed to contribute to the book in their field of competence and have gracefully accepted guidance from the editors in the definition of the subject and of the interfaces with other chapters. We thank Prof. Y.