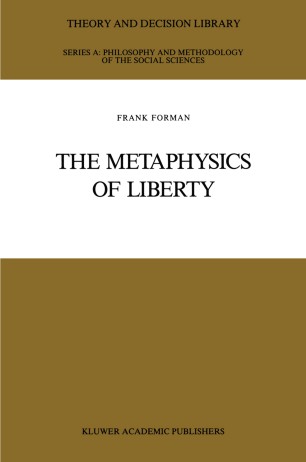 The Metaphysics of Liberty

Philosophy suffers from an excess of convoluted introspection. One result is that concepts multiply unchecked. That some events have observable causes gets reified into a First Cause or, in a more secular age, to the thesis that every event is fatalistically determined. Another drawback of convoluted introspection is that tiny but crucial assumptions slip in, often unawares, with the result that densely argued counter-tomes are written in reply and no progress is made toward any kind of consensus. At bottom, subjectivity reigns. I exaggerate. Toward the other pole of the subjectivity-objectivity continuum, consensus among scientists is in fact always at a good healthy distance from compulsive unanimity. New theories replace old, and at any one time the evidence can usually be interpreted two ways. Indeed, it is possible to pile epicycle upon epicycle in the Ptolemaic system of the heavens and approximate the ellipses planets travel in the Copernican system. What cinched the case for Copernicus was not simplicity--after all alchemy is simpler than chemisty. Nor was it experiment--there were no moon shots back then. Rather it was Newton's foundations. He established a physics for the earth and the heavens alike. Earthly physics we can verify, and it does not jell with the Ptolemaic system.