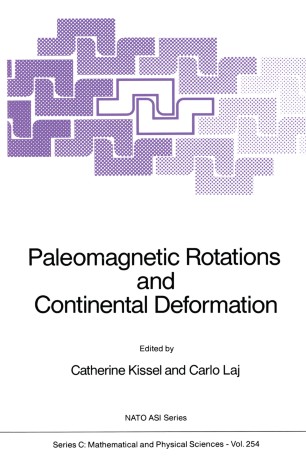 One of the most interesting results obtained in the last two decades in the study of crustal deformation has been the recognition that large regions of continental crust undergo rotations about vertical axis during deformation. Proof of such rotations has come through the paleomagnetic studies, which reveal rotations when paleomagnetic declinations within the deforming region arc compared with those found in coeval rocks in the stable regions outside the deforming zone. Such rotations were first described in Oregon then in the North American Cordilleras and in Southern California and were a surprise to everyone. Even in California which, as a result of oil exploration, was among the best geologically explored regions in the world, no one could claim to have predicted that these rotations would be found. Rotations have subsequently been found in other areas of recent continental tectonic activity, notably in the Basin and Range province, New Zealand, the Andes, Greece and Western Turkey, so that they appear as an important feature of continental deformation.