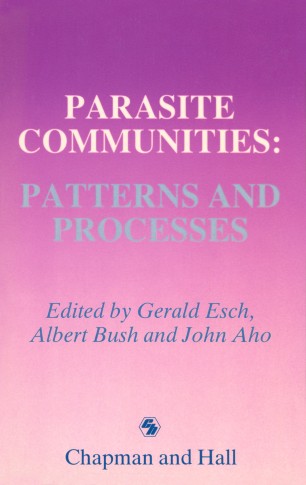 We first discussed the possibility of organizing a symposium on helminth communities in June, 1986. At that time, we were engaged in writing a joint paper on potential structuring mechanisms in helminth communities; we disagreed on a number of issues. We felt the reason for such debate was because the discipline was in a great state of flux, with many new concepts and approaches being introduced with increasing frequency. After consider­ able discussion about the need, scope and the inevitable limitations of such a symposium, we decided that the time was ripe to bring other ecologists, engaged in similar research, face-to-face. There were many individuals from whom to choose; we selected those who were actively publishing on helminth communities or those who had expertise in areas which we felt were particularly appropriate. We compiled a list of potential participants, contacted them and received unanimous support to organize such a symposium. Our intent was to cover several broad areas, fully recognizing that breadth negates depth (at least with a publisher's limitation on the number of pages). We felt it important to consider patterns amongst different kinds of hosts because this is where we had disagreed among ourselves.