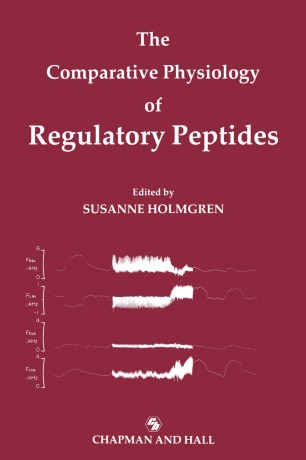 The Comparative Physiology of Regulatory Peptides

Strictly speaking, the term regulatory peptides may include any peptide which has a regulatory function in any organism. In recent years, how­ ever, the term has come to mean those originally classified as brain-gut peptides. The peptides initially defined as those belonging to the brain­ gut axis had a dual location in neurones of the brain and endocrine cells of the gut. We now include a number of neuropeptides found in the autonomic nervous system of the gut, the cardiovascular system and other systems. To many scientists comparative physiology means comparison of the mechanisms of certain functions in the rat, the guinea-pig, the cat and maybe some other mammal. If the philosophy is that man is the centre of the universe and other mammals can be used as 'models' of man, this may well be the most useful way to study the functions of the human being, without actually chopping somebody up. However, with a some­ what wider perspective on life, it is easy to see the importance of a full understanding of the function of all living organisms, in its own right as well as a link in the evolution towards individuals able to survive and reproduce in very different environments. The importance of com­ parative studies in all living organisms cannot be emphasized too much. It has been the ambition with this book to treat all animals as equally important.