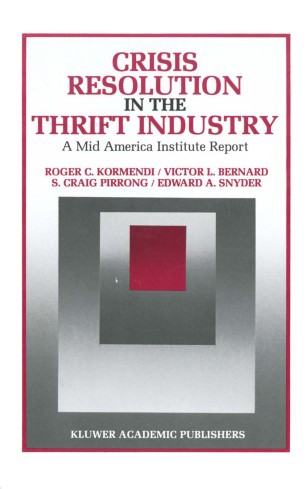 Crisis Resolution in the Thrift Industry

Part of the Innovations in Financial Markets and Institutions book series (IFMI, volume 3)

On February 6, 1989, the Federal Home Loan Bank Board contacted Mid America Institute to inquire whether it would undertake an independent, academically oriented analysis of the insolvency resolution crisis in the thrift industry. The Senate Banking Committee, during the course of hearings on the thrift crisis, had suggested to the Bank Board tile desirability of an independent assessment of Bank: Board and FSLIC resolution methodology, specifically as it related to the controversy surrounding the December deals, the Southwest Plan, and the possibility that tax considerations were driving certain deals. The Bank Board had already initiated studies from industry-oriented perspectives. Therefore, it felt that an academic perspective would provide both a valuable addition to the process, and by the nature of academia, perhaps the best prospect of a credible and independent viewpoint. The Bank Board was prepared to give an appropriately structured Task Force virtually unlimited access to all personnel, documents and resources that the Task Force felt necessary to come to an uncompromising assessment. The only significant constraint imposed was that a report had to be available prior to the start of the next round of Senate Banking Committee hearings on March 1, 1989. The Task Force would be given complete discretion as to the scope and coverage of the report, but it was requested that the topic of the December deals, particularly the associated tax considerations, be a significant part of the report.