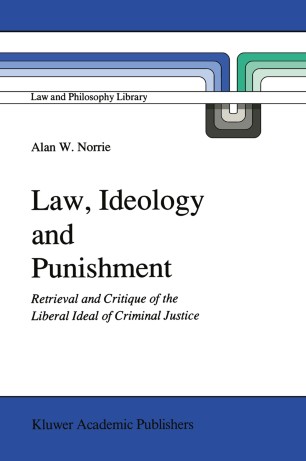 Retrieval and Critique of the Liberal Ideal of Criminal Justice

This book is about 'Kantianism' in both a narrow and a broad sense. In the former, it is about the tracing of the development of the retributive philosophy of punishment into and beyond its classical phase in the work of a number of philosophers, one of the most prominent of whom is Kant. In the latter, it is an exploration of the many instantiations of the 'Kantian' ideas of individual guilt, responsibility and justice within the substantive criminal law . On their face, such discussions may owe more or less explicitly to Kant, but, in their basic intellectual structure, they share a recognisably common commitment to certain ideas emerging from the liberal Enlightenment and embodied within a theory of criminal justice and punishment which is in this broader sense 'Kantian'. The work has its roots in the emergence in the 1970s and early 1980s in the United States and Britain of the 'justice model' of penal reform, a development that was as interesting in terms of the sociology of philosophical knowledge as it was in its own right. Only a few years earlier, I had been taught in undergraduate criminology (which appeared at the time to be the only discipline to have anything interesting to say about crime and punishment) that 'classical criminology' (that is, Beccaria and the other Enlightenment reformers, who had been colonised as a 'school' within criminology) had died a major death in the 19th century, from which there was no hope of resuscitation.