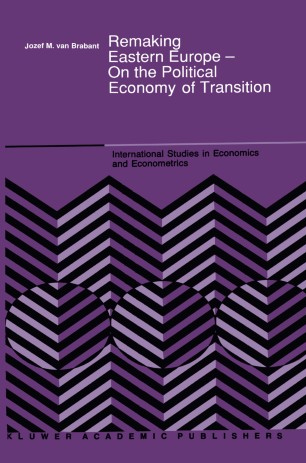 Remaking Eastern Europe — On the Political Economy of Transition

Part of the International Studies in Economics and Econometrics book series (ISEE, volume 23)

This compact volume is meant as a modest contribution to the ongoing debate on how to transform in particular the radically reforming Eastern European economies into more productive sociopolitical organizations. Although my main focus here is on the economics of reform and east-west assistance, I have tried to embed the multiple technical aspects of restructuring such a resource alloca­ tion into the context of remaking Eastern Europe. That the volume coincides with the seminal transformations of the communist countries of Eastern Europe is, of course, not fortuitous. But I shall have much less to say about the politi­ cal transitions from communism to parliamentary democracy, except the ways in which the latter may bolster or hinder the hoped-for economic mutations. In taking stock of where I stand on the issue of "radical reform" of planned economics in general and the CMEA in particular, both still moving targets, I have benefited greatly from participation in formal and informal conferences on economic reform. The product has also profited from many informal discus­ sions and exchanges of views among friends and colleagues, including those entrusted with and purely interested in efforts on the overall topic of the study launched from within the broad context of the United Nations, my at times reluctant employer.