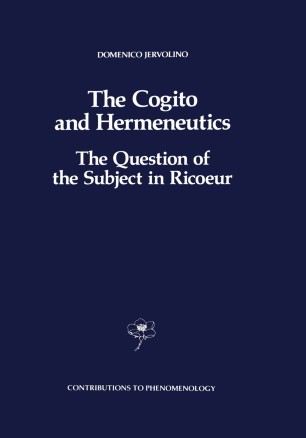 The Cogito and Hermeneutics: The Question of the Subject in Ricoeur

Part of the Contributions to Phenomenology book series (CTPH, volume 6)

by Paul Ricoeur It is already a piece of good fortune to find oneself understood by a reader who is at once demanding and benevolent. It is an even greater fortune to be better understood by another than by one's own self. In effect, when I look back, I am rather struck by the discontinuity among my works, each of which takes on a specific problem and apparently has little more in common with its predecessor than the fact of having left an overflow of unanswered questions behind it as a residue. On the contrary, Domenico Jervolino's interpretation of my works, which extend over more than forty years, stresses their coherence, in spite of the gap in time between my present, soon to be issued work--Temps et Recit--and my first, Philosophie de la Volonte: Ie Volontaire et l'lnvolontaire. Our friend finds the principle of coherence first of all in the recurrence of a problem: the destiny of the idea of subjectivity, caught in the cross-fire between Nietzsche and Heidegger on one side and semiology, psychoanalysis and the critique of ideology on the other. He finds it likewise in the insistence on a method: the mediating role played by interpretation, mainly of texts, with regard to reflexion on self.