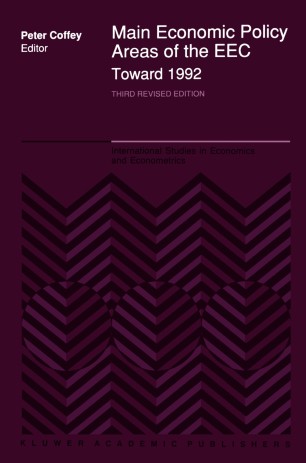 Part of the International Studies in Economics and Econometrics book series (ISEE, volume 20)

PETER COFFEY Since the appearance of the second edition of this work - which was so quickly out of print - so much has happened in Europe. In the EEC itself, 1989 was a watershed year concerning the Community's moves towards the creation of the Single European Market (SEM) by the end of 1992. Early in the year, the appear­ ance of the De10rs Report on Economic and Monetary Union in the European Community, was followed by an agreement, at the European Summit, in June, to begin the first stage of this union in the Summer of 1990. As a counterpart to this and other agree­ ments, seen by trade unions and similar groups as an agreement * New composition of the ECU as on 21 st September 1989. Deutsche Mark DEM : 30.10% French Franc FRF : 19.00% Pound Sterling GBP : 13.00% Italian Lira ITL : 10.15% Dutch Guilder NLG 9.40% 7.90% Belgian Franc BFR 2.45% Danish Kronor DKK 1.10% Irish Pund IEP 0.80% Greek Drachma GRD 5.30% Spanish Peseta ESP 0.80% Portuguese Escudo PTE IX x between governments and businesses, there followed calls for and the adoption by eleven Heads of State of a Social Charter.