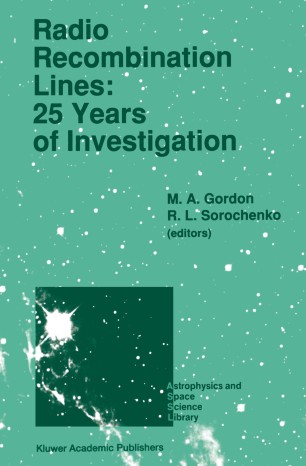 Proceedings of the 125th Colloquium of the International Astronomical Union, Held in Puschino, U.S.S.R., September 11–16, 1989

Text no 1
Radio Recombination Lines (RRLs), discovered in the USSR in 1964, have become a powerful research tool for astronomers. Available throughout the radio spectrum, these lines carry information regarding the density, temperature, turbulence and velocity of thermal plasmas. Their very existance shows the presence of thermal gas. They also can carry information regarding magnetic fields if Zeeman splitting were to be detected.
Containing the proceedings of an IAU Colloquium celebrating the 25th anniversary of their detection, this volume tells us what has happened since. It contains the story of the detection of RRLs and reviews of many areas of physics of the interstellargas from which stars form, HII regions excited by newly formed stars, planetary nebulae involving dying stars, and the structure of our Milky Way and other galaxies reflecting the large-scale morphology of the star formation process. In addition there is an article describing modern laboratory studies of Rydberg atoms to probe the basic physics of atomic structure, and articles describing the theory of collisions and radiation upon Rydberg atoms leading to observate effects to be used as diagnostic tools in astromony.
This book focuses on the 25 years of astronomical research with radio recombination lines (RRLs) since their discovery in 1965. It covers a wide range of topics: papers dealing with research into Rydberg atoms both in the laboratory and in the interstellar medium of our galaxy and others; papers on the interaction of radiation and atomic systems, as well as with the effects of inadiabatic collisions between these atoms and both ions and electrons. It deals with astronomical observations of atoms with `diameters' ranging from 0.08 to 50 mum a size factor of 625. It deals with RRLs in absorption, in emission and as true masers. And it deals with plasmas with temperatures ranging from 10 to greater than 104 kelvins, and with an even greater range of volume densities.
Much new work is reported, including low frequency RRLs discovered in 1980 and the maser RRLs from the star MWC349, discovered in 1989. The advent of aperture synthesis telescopes and large single-element telescopes have made possible RRL studies with high angular resolution. The sum total of the work reported here will make the volume a platform from which to search new horizons in RRL research.