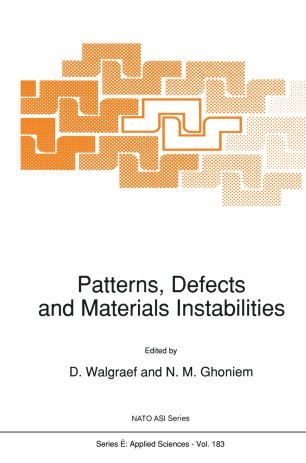 Understanding the origin of spatio-temporal order in open systems far from thermal equilibrium and the selection mechanisms of spatial struc­ tures and their symmetries is a major theme of present day research into the structures of continuous matter. The development of methods for pro­ ducing spatially ordered microstructures in solids by non-equilibrium methods opens the door to many technological applications. It is also be­ lieved that the key to laminar/turbulence transitions in fluids lies in the achievement of spatio-temporal order. Let us also emphasize the fact that the idea of self-organization in it­ self is at the origin of a reconceptualisation of science. Indeed, the appear­ ance of order which usually has been associated with equilibrium phase transitions appears to be characteristic of systems far from thermal equi­ librium. This phenomenon which was considered exceptional at first now the rule in driven systems. The chemical oscillations obtained appears to be in the Belousov-Zhabotinskii reaction were initially considered to be ther­ modynamically impossible and were rejected by a large number of chemists. Now these oscillations and related phenomena (waves, chaos, etc. ) are the subject of intensive research and new classes of chemical oscil­ lators have been recently discovered. Even living organisms have long been considered as the result of chance rather than necessity. Such points of view are now abandoned under the overwhelming influence of spatio-tem­ poral organization phenomena in various domains ranging from physics to biology via chemistry, nonlinear optics, and materials science .