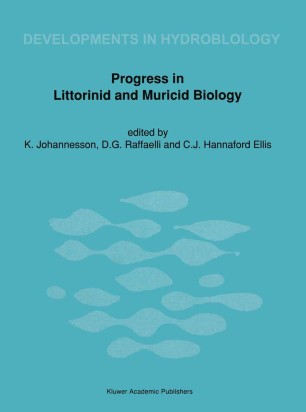 Part of the Developments in Hydrobiology book series (DIHY, volume 56)

Littoral gastropods of the families Littorinidae and Muricidae are well studied compared to most marine taxa, yet there remain many basic problems concerning their taxonomy, ecology and evolutionary biology. In other words, we know these snails well enough to realize just how little we really know about them. This awareness prompted the First European Meeting on Littorinid Biology held at the British Museum in London on 26th November 1986, and the discussion continued through the Second Meeting on Littorinid Biology, held at the Tjarno Marine Biological Laboratory, Sweden, from 4th to 8th July 1988. During the Tjiirno meeting, it was agreed to have a third meeting at Dale, Pembroke shire, U.K. in 1990. Twenty-two people attended the Tjarno meeting, and a further ten contributed as co-authors to the papers that were presented. These covered research in progress in a broad range of topics, and geo­ graphical areas. Unfortunately, Cesare Sacchi and Domenico Voltolina, as well as Elisabeth Boulding were not able to attend the meeting in person, but their contributions were ably presented by David Reid and Richard Palmer, respectively. We also regret that one of us, C.E., and several of our Russian colleagues, did not have the opportunity to come.