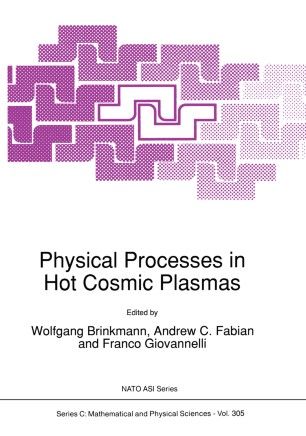 Gas at temperatures exceeding one million degrees is common in the Universe. Indeed it is likely that most of the gas in the Universe exists in intergalactic space in this form. Such highly-ionized gas, or plasma, is not restricted to the rarefied densities of intergalactic space, but is also found in clusters of galaxies, in galaxies themselves, in the expanding remnants of exploded stars and at higher densities in stars and the collapsed remains of stars up to the highest densities known, which occur in neutron stars. The abundant lower-Z elements, at least, in such gas are completely ionized and the gas acts as a highly conducting plasma. It is therefore subject to many cooperative phenomena, which are often complicated and ill-understood. Many of these processes are, however, well-studied (if not so well-understood) in laboratory plasmas and in the near environment of the Earth. Astronomers therefore have much to learn from plasma physicists working on laboratory and space plasmas and the parameter range studied by the plasma physicists might in turn be broadened by contact with astronomers. With that in mind, a NATO Advanced Research Workshop on Physical Processes in Hot Cosmic Plasmas was organized and took place in the Eolian Hotel, Vulcano, Italy on May 29 to June 2 1989. This book contains the Proceedings of that Workshop.