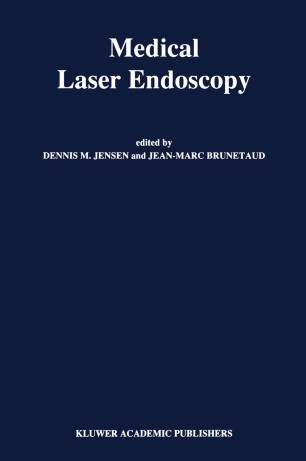 Part of the Developments in Gastroenterology book series (DIGA, volume 10)

There has been incredible progress over the last decade in therapeutic endoscopy. Such therapies are either easier now than ten years ago or are possible when previously they were inconceivable. These advances have depended upon major improvements in diagnostic endoscopy for different subspecialties. Simultaneously, a major innovation for therapeutics through endoscopes is the application of medical lasers. This book is written by renowned biophysicists and laser endoscopists of different sub specialties where the application of lasers has revolutionized medical care. In some cases treatments which were not previously possible are now routine. Laser palliation of obstructing tumors in different sub specialties is an example of this. In other cases, resective surgery is obviated by the application of lasers via endoscopy such as for the control of gastrointestinal bleeding. The authors of different medical or surgical subspecialties which use endoscopic lasers write about the pathology and clinical problems, their personal experience and results. However, they also emphasize their techniques of laser endoscopy through case examples, technical discussions, and colored illustrations. Their discussions will give the reader a better understanding about the role of laser treatment of different conditions compared to routine medical or surgical therapy. In several instances, randomized controlled trials involving medical lasers were discussed in this book because they fundamentally changed our understanding of common problems such as upper gastrointestinal bleeding. We predict continued progress in therapeutic endoscopy.