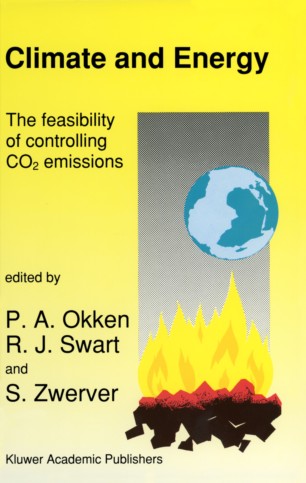 Climate and Energy: The Feasibility of Controlling CO2 Emissions

Rapidly increasing concentrations of greenhouse gases in the atmosphere, emerging evidence of global warming and the threat of uncontrollable climate feedback mechan:i,sms are now triggering international action to reduce the emissions of greenhouse gases. In 1989 the Intergovernmental Panel on Climate Change (IPCC), established by the United Nations Environment Pro­ gramme and the World Meteorological Organization, started preparations for an international convention on climate. This convention is to be followed by protocols (agreements) on the reduction of the emissions of greenhouse gases and other measures and implementation mechanisms to preserve the global climate. After the CFC's, CO is the next in line, as the sources 2 and abatement measures for CH and N 0 are as yet insuffi­ 4 2 ciently understood. However, the abatement of CO . is a far 2 reaching issue. It will require major changes wi thin the most important sectors of the economy: energy (production and use) and agriculture (deforestations and land use pat­ terns). Given this situation it is not so surprising that national governments are hesitant to take action. One reason is the remaining uncertainty regarding the rat,e and the extent of climate change. However, further analysis will show that the uncertainties will be outweighed by the increasing risks when measures to reduce the emission of greenhouse gases are delayed.