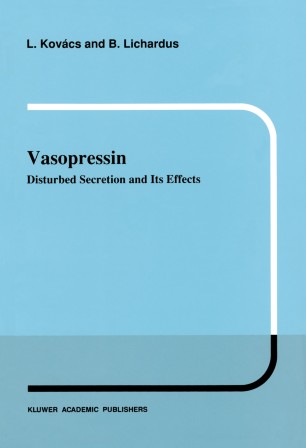 Disturbed Secretion and Its Effects

Part of the Developments in Nephrology book series (DINE, volume 25)

The mechanisms by which animals regulate the volume and composition of their body fluids has long had a particular fascination for students of biology. As a consequence, the subject can lay claim to an impressive record of ground­ breaking scientific achievements as well as a provocative body of philosophical speculation concerning the role of the system in the origin and evolution of life. Indeed, the entire concept of homeostasis on which so much of o~r current biologic thinking is based, derives from Claude Bernard's pioneering exploration of the forces that determine the composition of this 'internal sea'. Other seminal achievements credited to this area of inquiry include the first description of a genetically transmitted human disease (familial neurogenic diabetes insipidus); the first isolation sequencing and synthesis of a peptide hormone (vasopressin and oxytocin); the first demonstration of peptide hormone synthesis by way of a larger protein precursor; the first description of resistance to the biologic actions of a hormone (nephrogenic diabetes insipidus); and the conceptual realization of the unique counter-current mechanism that permits concentration of the urine. This record of far reaching and fundamental advances has been distinguished by many fruitful inter­ actions between clinical and basic science.