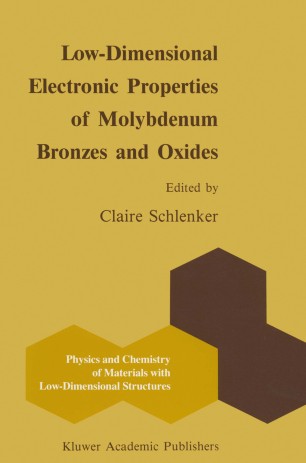 Part of the Physics and Chemistry of Materials with Low-Dimensional Structures book series (PCMALS, volume 11)

The history of low dimensional conductors goes back to the prediction, more than forty years ago, by Peierls, of the instability of a one dimensional metallic chain, leading to what is known now as the charge density wave state. At the same time, Frohlich suggested that an "ideal" conductivity could be associated to the sliding of this charge density wave. Since then, several classes of compounds, including layered transition metal dichalcogenides, quasi one-dimensional organic conduc­ tors and transition metal tri- and tretrachalcogenides have been extensively studied. The molybdenum bronzes or oxides have been discovered or rediscovered as low dimensional conductors in this last decade. A considerable amount of work has now been performed on this subject and it was time to collect some review papers in a single book. Although this book is focused on the molybdenum bronzes and oxides, it has a far more general interest in the field of low dimensional conductors, since several of the molybdenum compounds provide, from our point of view, model systems. This is the case for the quasi one-dimensional blue bronze, especially due to the availability of good quality large single crystals. This book is intended for scientists belonging to the fields of solid state physics and chemistry as well as materials science. It should especially be useful to many graduate students involved in low dimensional oxides. It has been written by recognized specialists of low dimensional systems.