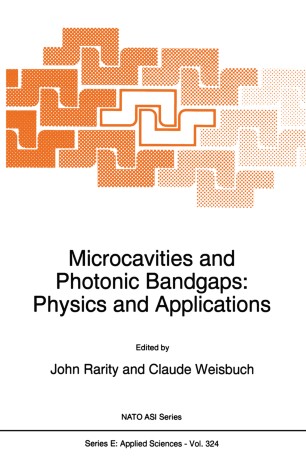 The control of optical modes in microcavities or in photonic bandgap (PBG) materials is coming of age! Although these ideas could have been developed some time ago, it is only recently that they have emerged, due to advances in both atomic physics and in fabrication techniques, be it on the high-quality dielectric mirrors required for high-finesse Fabry­ Perot resonators or in semiconductor multilayer deposition methods. Initially the principles of quantum electro-dynamics (QED) were demonstrated in elegant atomic physics experiments. Now solid-state implementations are being investigated, with several subtle differences from the atomic case such as those due to their continuum of electronic states or the near Boson nature of their elementary excitations, the exciton. Research into quantum optics brings us ever newer concepts with potential to improve system performance such as photon squeezing, quantum cryptography, reversible taps, photonic de Broglie waves and quantum computers. The possibility of implementing these ideas with solid-state systems gives us hope that some could indeed find their way to the market, demonstrating the continuing importance of basic research for applications, be it in a somewhat more focused way than in earlier times for funding.