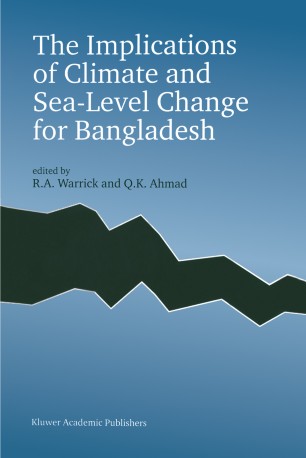 The Implications of Climate and Sea–Level Change for Bangladesh

Although the "greenhouse effect" and "global climate change" have been the subjects of scientific scrutiny for many decades, only recently have they received widespread public attention. Two major events helped generate this attention. First, in 1990 the Intergovernmental Panel on Climate Change (IPCC) published its findings on the science, impacts and policy implications of climate change. The findings of the IPCC, prepared and reviewed extensively by the world's leading experts in the field, confirmed that the increasing atmospheric concentrations of "greenhouse" gases, such as carbon dioxide, methane, nitrous oxide and the chlorofluorocarbons, could cause the world to warm and sea level to rise. Second, in 1992 the United Nations Conference on Environment and Development (UNCED) inRio de Janeiro focussed the attention of the world's national governments, as well as organisations and individuals outside the governments, on the threat of global climate change. The Framework Convention on Climate Change (FCCC), signed by nations at UNCED, reflects both the concern about the effects of climate change and the urgent need for action to prevent or reduce its potential impacts, particularly with respect to the vulnerable developing countries of the world. Bangladesh ratified the FCCC on 15 April 1994. The countries that have signed and ratified the FCCC are obligated to report to the Conference of the Parties (CoP) to the Convention on a number of inter­ related issues.