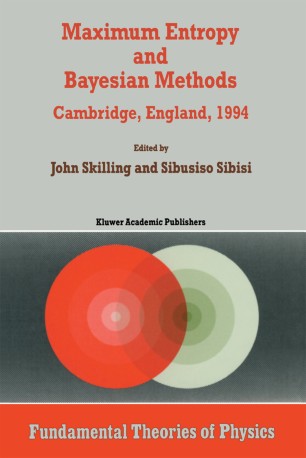 This volume records papers given at the fourteenth international maximum entropy conference, held at St John's College Cambridge, England. It seems hard to believe that just thirteen years have passed since the first in the series, held at the University of Wyoming in 1981, and six years have passed since the meeting last took place here in Cambridge. So much has happened. There are two major themes at these meetings, inference and physics. The inference work uses the confluence of Bayesian and maximum entropy ideas to develop and explore a wide range of scientific applications, mostly concerning data analysis in one form or another. The physics work uses maximum entropy ideas to explore the thermodynamic world of macroscopic phenomena. Of the two, physics has the deeper historical roots, and much of the inspiration behind the inference work derives from physics. Yet it is no accident that most of the papers at these meetings are on the inference side. To develop new physics, one must use one's brains alone. To develop inference, computers are used as well, so that the stunning advances in computational power render the field open to rapid advance. Indeed, we have seen a revolution. In the larger world of statistics beyond the maximum entropy movement as such, there is now an explosion of work in Bayesian methods, as the inherent superiority of a defensible and consistent logical structure becomes increasingly apparent in practice.