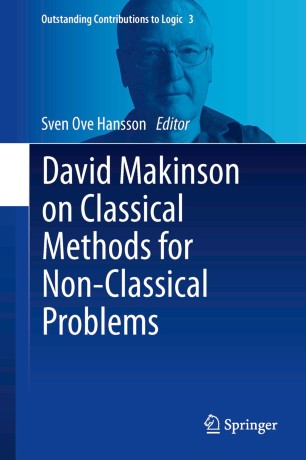 The volume analyses and develops David Makinson’s efforts to make classical logic useful outside its most obvious application areas. The book contains chapters that analyse, appraise, or reshape Makinson’s work and chapters that develop themes emerging from his contributions. These are grouped into major areas to which Makinsons has made highly influential contributions and the volume in its entirety is divided into four sections, each devoted to a particular area of logic: belief change, uncertain reasoning, normative systems, and the resources of classical logic.

Among the contributions included in the volume, one chapter focuses on the “inferential preferential method”, i.e. the combined use of classical logic and mechanisms of preference and choice and provides examples from Makinson’s work in non-monotonic and defeasible reasoning and belief revision. One chapter offers a short autobiography by Makinson which details his discovery of modern logic, his travels across continents and reveals his intellectual encounters and inspirations. The chapter also contains an unsually explicit statement on his views on the (limited but important) role of logic in philosophy.

“A fine bunch of authors present papers about the present status of the fields of work of an outstanding logician, David Makinson, in this book. … I think that graduate students and researchers in the area of logic and artificial intelligence will especially benefit from reading this book, for the perspective it provides on what one should work on in these areas (tools and techniques) and how one should work in these areas (with clarity and precision).” (K. Lodaya, Computing Reviews, May, 2014)
Buy options