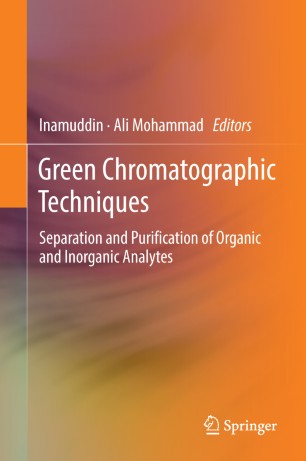 Separation and Purification of Organic and Inorganic Analytes

This book offers a valuable resource not only for learners, but also for more experienced chromatographers, conveying a deeper understanding of green chromatographic techniques, green solvents and preparation methods.

Dr. Inamuddin is currently working as an Assistant Professor at the Department of Applied Chemistry, Aligarh Muslim University (AMU), Aligarh, India. He received his Master of Science degree in Organic Chemistry from Chaudhary Charan Singh (CCS) University, Meerut, India, in 2002 and his Master of Philosophy and Doctor of Philosophy degrees in Applied Chemistry from the AMU in 2004 and 2007, respectively. He has extensive research experience in multidisciplinary fields of Analytical Chemistry, Materials Chemistry, and Electrochemistry and, more specifically, Renewable Energy and Environment. He has worked under different research projects as a project fellow and senior research fellow funded by the University Grants Commission (UGC), Government of India, and Council of Scientific and Industrial Research (CSIR), Government of India. He has received a Fast Track Young Scientist Award from the Department of Science and Technology, India, to work in the area of bending actuators and artificial muscles and is currently running two additional major research projects funded by the UGC and CSIR. He has published 35 research articles in respected international journals and four book chapters in knowledge-based book editions published by major international publishers. He has published four edited books with Springer, United Kingdom and one with Nova Science Publishers, Inc., USA. He is presently working as editor-in-chief of The Journal of Chemical and Environmental Research, published in India by The Muslim Association for the Advancement of Science. He has worked as a Postdoctoral Fellow, leading a research team at the Creative Research Initiative Center for Bio-Artificial Muscle, Hanyang University, South Korea, in the field of renewable energy, especially biofuel cells. He has also worked as a Postdoctoral Fellow at the Center of Research Excellence in Renewable Energy, King Fahd University of Petroleum and Minerals, Saudi Arabia, in the field of polymer electrolyte membrane fuel cells and computer fluid dynamics of polymer electrolyte membrane fuel cells. He is a life member of the Journal of the Indian Chemical Society.
Ali Mohammad is a Professor of Chemistry (Emeritus) at the Department of Applied Chemistry, Faculty of Engineering and Technology, Aligarh Muslim University, Aligarh, India. His scientific interests include physico-analytical aspects of solid-state reactions, micellar thin layer chromatography, surfactants analysis, and green chromatography. He is the author or coauthor of 230 scientific publications including research articles, reviews, and book chapters. He has also served as editor of Journal, Chemical and Environmental Research since 1992 and as the Associate Editor for the Analytical Chemistry section of the Journal of Indian Chemical Society. He has also served on the editorial boards of Acta Chromatographica, Acta Universitatis Cibiniensis Seria F. Chemia, Air Pollution, and Annals of Agrarian Science. He has attended as well as chaired sessions in various international and national conferences. Dr. Mohammad obtained his M.Phil. (1975), Ph.D. (1978), and D.Sc. (1996) degrees from Aligarh Muslim University, Aligarh, India. He has supervised 51 students for Ph.D./M.Phil. and M.Tech. degrees.