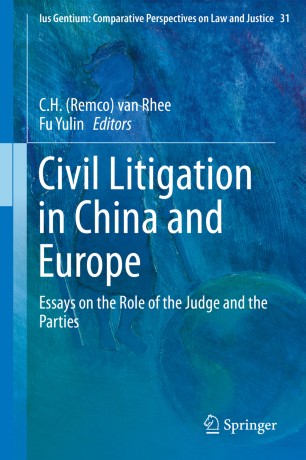 Civil Litigation in China and Europe

Essays on the Role of the Judge and the Parties

This volume addresses the role of the judge and the parties in civil litigation in mainland China, Hong Kong and various European jurisdictions. It provides an overview and an analysis of how these respective roles have been changed in order to cope with growing caseloads and quality demands. It also shows the different approaches chosen in the jurisdictions covered.

Mainland China is introducing far-reaching reforms in its system of civil litigation. From an inquisitorial procedure, in which the parties play a relatively minor role, the country is changing to a more adversarial system with increased powers for the parties. At the same time, case management and the role of the judge as it is understood in mainland China remains different from case management and the role of the judge in Western countries, mainly as regards the limited powers of individual Chinese judges in this respect. Changes in China are justified by the ever-increasing case load of the Chinese courts and the consequent inability to deal with cases in an adequate manner, even though generally speaking Chinese courts still adjudicate civil cases within a relatively short time frame (this may, however, be problematic when viewed from the perspective of the quality of adjudication).

Growing caseloads and quality concerns may also be observed in various European states and Hong Kong. In these jurisdictions the civil procedural systems have a relatively adversarial character and it is some of the adversarial features of the existing systems of procedure which are felt to be problematic. Therefore, the lawmakers have opted for increasing the powers of the judge, often making the judge and the parties mutually responsible for the proper conduct of civil cases.

Starting from opposite directions, mainland China and the various European states and Hong Kong could meet half way in their reform attempts. This is, however, only possible if a proper understanding is fostered of the developments in these different parts of the World. Even though in both China and Europe the academic community and lawmakers are showing a keen interest in the relevant developments abroad, a study addressing the role of the judge and the parties in civil litigation in both China and Europe is still missing. This book aims to fill this gap in the existing literature.