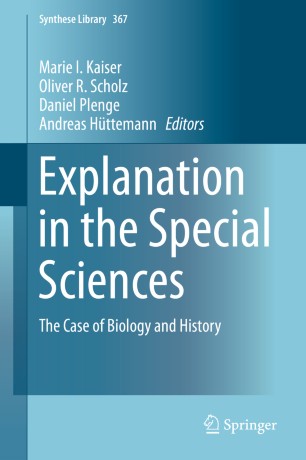 Explanation in the Special Sciences

The Case of Biology and History

Biology and history are often viewed as closely related disciplines, with biology informed by history, especially in its task of charting our evolutionary past. Maximizing the opportunities for cross-fertilization in these two fields requires an accurate reckoning of their commonalities and differences—precisely what this volume sets out to achieve. Specially commissioned essays by a team of recognized international researchers cover the full panoply of topics in these fields and include notable contributions on the correlativity of evolutionary and historical explanations, applying to history the latest causal-mechanical approach in the philosophy of biology, and the question of generalized laws that might pertain across the two subjects.

The collection opens with a vital interrogation of general issues on explanation that apart from potentially fruitful areas of interaction (could the etiology of the causal-mechanical perspective in biology account for the historical trajectory of the Roman Empire?) this volume also seeks to chart relative certainties distinguishing explanations in biology and history. It also assesses techniques such as the use of probabilities in biological reconstruction, deployed to overcome the inevitable gaps in physical evidence on early evolution. Methodologies such as causal graphs and semantic explanation receive in-depth analysis. Contributions from a host of prominent and widely read philosophers ensure that this new volume has the stature of a major addition to the literature. ​