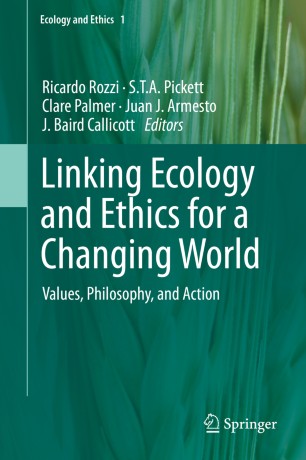 Linking Ecology and Ethics for a Changing World

Part of the Ecology and Ethics book series (ECET, volume 1)

Ecological sciences have informed environmental ethics from its inception as a scholarly pursuit in the 1970s—so much so that we now have ecological ethics, Deep Ecology, and ecofeminism. Throughout the 20th century, however, most ecologists remained enthralled by the myth that science is value-free. Closer study of science by philosophers reveals that metaphors are inescapable and cognitively indispensable to science, but that metaphors are value-laden. As we confront the enormous challenges of the 21st century—the prospect of a 6th mass extinction, acidifying oceans, rising sea level, and global warming—ecologists can no longer remain aloof from public discourse about what actions to take to address these problems. And that means that 21st century ecologists understand that right action is guided by ethics. However, integration of ethical ideas into academic curricula and ecologists’ research agendas is still meager. Aldo Leopold, 1947 President of the Ecological Society of America, keenly understood that latent in ecological sciences is an organizing worldview, with implications for reordering societal values and expanding ethics to embrace “soils, waters, plants, and animals, or collectively: the land.” Going beyond Leopold’s land ethic, contemporary environmental ethics includes eco-social justice and the realization that as important as biodiversity is cultural diversity, inter-cultural, inter-institutional, and international collaboration requiring a novel approach known as biocultural conservation. Right action in confronting the challenges of the 21st century requires science and ethics to be seamlessly integrated. Contemporary science proposes the concept of the inclusive ecosystem that recognizes humans as components. In this book, this “inclusive conviction is endorsed, fortunately, by over forty contributors sharing their accounts, of living well in place, combining nature and culture, residing on landscapes: biocultural ethics” (Holmes Rolston, III).

“The book, the product of a Cary Conference, is an argument for combining human values with scientific knowledge. … The book should be required reading for professionals in environmental ethics and environmental education. Summing Up: Highly recommended. Graduate students, researchers/faculty, and professionals/practitioners.” (M. LaBar, Choice, Vol. 51 (11), August, 2014)
Buy options