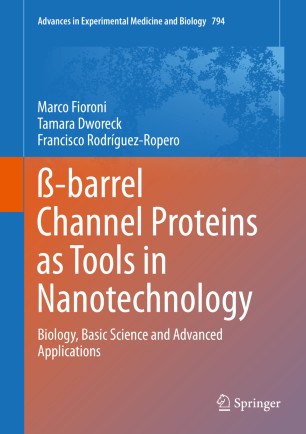 Part of the Advances in Experimental Medicine and Biology book series (AEMB, volume 794)

b-barrel outer membrane channel proteins (OMP) have great potential as robust and flexible models or components in nanotechnology. Over the last decade biotechnological techniques allowed to expand the natural characteristics of OMPs by modifying their geometry and properties without affecting the overall protein structure and stability. The present book is oriented towards a broad group of readers including graduate students and advanced researchers. The b-barrel structure serviceability for the nano-material design will be its chief topic giving a general introduction to the field of OMP based nano-component development as well as the state of the art of the involved research. On the example of the E. coli FhuA the transformation of an OMP into a tailored nano-channel to be adapted to a non-biological synthetic (i.e. polymer) environment, rendering it competitive with artificial non-biological nano-pores will be outlined specifically the design of a set of protein nano-channels with tailored geometry (diameter, length), conductance and functionality will be reported as a case study.

In order to make this book a valuable source of information for both biotechnologists and other scientists interested in bio-nanotechnology an overview of the different steps involved in the nano-channel protein design and production will be reported. The scientific strategy from concept design, theoretical considerations, genetic engineering and large scale production, to system assembly and biophysical characterization with an overview on technological applications including membrane/polymersome technology, will be described.

“This book is a good introduction to the problems of OMPs and their use as nanotechnology material. Because the book considers the aspects of concept design, theoretical considerations, production traps, and the biological characterization of OMP, it should be useful for graduate students and researchers in the field of nanotechnology.” (Alexander Tzanov, Computing Reviews, March, 2014)