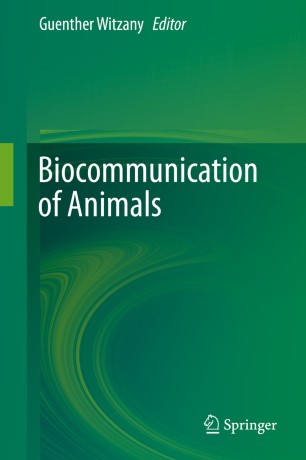 Every coordination within or between animals depends on communication processes. Although the signaling molecules, vocal and tactile signs, gestures and its combinations differ throughout all species according their evolutionary origins and variety of adaptation processes, certain levels of biocommunication can be found in all animal species:

(a) Abiotic environmental indices such as temperature, light, water, etc. that affect the local ecosphere of an organism and are sensed, interpreted (against stored background memory) and then being used for organisation of response behavior to adapt accordingly (concerning optimal energy cost).

(b) Transspecific communication with non-related organisms as found in attac, defense and symbiotic (even endosymbiotic) sign-mediated interactions.

(d) Intraorganismic communication, i.e., sign-mediated coordination within the body of the organism. This means two sublevels, such as cell-cell communication as well as intracellular signaling between cellular parts.

In any case, the context of a given situation determines the meaning of the used signs: (a) growth and (b) development are different modes of behaviour and need other patterns of signaling than (c) defence or (d) reproductive patterns. Likewise, (e) mutualistic symbioses require different forms of coordination from those of (f) commensalism or (e) parasitism.  Thus, this systematic approach of animal communication demonstrates that the meaning (semantics) of signs is context-dependent, and helps to give a better understanding of the full range of sign-mediated interactions of coral life.

This book gives an overview of the manifold levels of animal communication exemplified by a variety of species and thereby broadens the understanding of these organisms.